Book Review, Giveaway: I Give You My Heart by SarahJane Ford 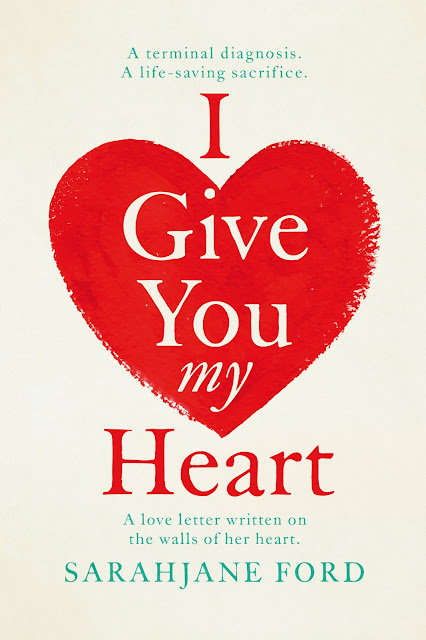 I Give You My Heart

Alice Richards looked forward to watching the seeds of love she and her husband planted bloom and grow well into their old age. But her plans for the future shrivel up and die when she learns she has an inoperable brain tumor

Determined that she won’t die in vain, she decides to become an organ donor. With a few precious months left, Alice begins documenting her fairytale romance—from their first meeting to the children they dreamed of having. She’ll pass on every detail to her heart’s next owner… along with careful instructions to send her husband reminders of her undying love. Before her time runs out, Alice must find the perfect candidate to guide her husband through unimaginable grief and hold the memory of their love in her heart.

I Give You My Heart is an emotional romantic fiction novel with an uplifting message. If you like strong-willed women, undying love stories, and honest portrayals of coping with a terminal illness, then you’ll love SarahJane Ford’s heart-warming epic.

An unmissable love story full of warmth, beauty and with a huge, beating heart. Perfect for fans of Cecilia Ahern’s ‘P.S. I Love You’ and Jojo Moyes’ ‘Me Before You’.

He moved words around his mouth, silently, testing how they tasted before releasing them into the air.

I wondered when you were going to bring up your eyebrows, Al. What has happened to them? Did two caterpillars go to sleep on your face and you just didn’t notice?

She’d be the one on the front row of the nativity play clapping her hands red, her camera blinding all the children the whole way through the play, making her little darling feel like the next Leonardo DiCaprio while donning the back half of a donkey suit. She was the best.

Because she has to be perfect, you know? This is Alex we’re talking about. I mean I was thinking looks of Julia Roberts, spirit of Mother Theresa, sense of humour of Steve Martin, heart of, well, me.

Well, before I went into that operating theatre, I couldn’t draw so much as a stick man. When I came to, the first thing I asked is, could you pass me my pencils? Since then I’ve hardly been able to stop my hands. My new heart tells them and then they do it… I go in as a lifetime loser at Pictionary and come out as the next Rembrandt.

Despite the expected seriousness of the underlying premise featuring a terminally ill main character, this brilliantly written first person POV narrative was a pleasantly insightful, thoughtful, and witty read.  After the twenty-six-year-old character of Alice was given the life-shattering news of an inoperable brain tumor, she set about filling her last months on earth with enjoying as many pleasant moments as she could with her loved ones while organizing a plan and writing a personal letter for every possible organ recipient.

I adored these captivating characters; their stories made my coronary muscle sigh and sing, as well as squeezed and tugged at the poor old thing.  There were a few spots that burned my eyes and put hot rocks in my throat, but the vast majority of the book was artful storytelling that was lushly detailed with vivid and amusing observations and oh so many thoughtful touches.  The character of Alice was determined to make a difference by donating as many organs and bits and pieces of her body as was possible, but she had a particular plan for the recipient of her heart.  She set about writing a detailed instruction manual and was rather bossy in filling it not only with her personal history and special memories with her husband, but with detailed plans, suggestions, and specific requirements for the recipient of her heart to fulfill in hopes of easing her beloved husband back from the grief of her passing.  I am fascinated with the idea of cellular memory and relished this thread throughout her storylines.  I have a feeling the sweetness of this story will stay with me for quite some time.  To use a phrase from my ever-expanding Brit Vocab list – it worked a treat.

SarahJane is the debut author of ‘I Give You My Heart’ which is due to be published on September 1, 2018.

SarahJane was born in Scotland but grew up in the Cheshire countryside, which is home to her. After a few years living in Oxfordshire and Buckinghamshire, where she went to secondary school, she has now settled back in Cheshire in a quirky flat surrounded by trees, birds and rolling fields.

A marketing professional since finishing her formal education SarahJane is delighted to be following her writing dream. She still works part-time as a Marketing Manager, whilst furiously penning her second novel.

Harbouring an adventurous spirit, SarahJane loves to travel, be surrounded by the wilderness or be riding Cornish waves.

SarahJane loves to read (ideally by the sea!). She was raised on the greatest love stories, which is where her romantic soul comes from. She is in love with love...Mr. Darcy's brooding looks in Pride and Prejudice; Julia Roberts and Richard Gere's arresting chemistry in Runaway Bride; the intensely emotional Titanic; going weak at the knees for Danny Zuko in Grease; Cecilia Ahern's heartbreaking P.S. I Love You and Patrick Swayze's mega moves in Dirty Dancing.

*Terms and Conditions –UK entries welcome. Please enter using the Rafflecopter box below. The winner will be selected at random via Rafflecopter from all valid entries and will be notified by Twitter and/or email. If no response is received within 7 days then I reserve the right to select an alternative winner. Open to all entrants aged 18 or over. Any personal data given as part of the competition entry is used for this purpose only and will not be shared with third parties, with the exception of the winners’ information. This will be passed to the giveaway organizer and used only for the fulfilment of the prize, after which time I will delete the data. I am not responsible for despatch or delivery of the prize. 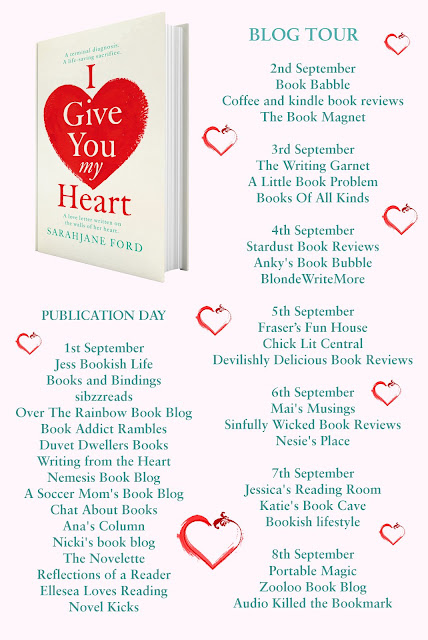 Email ThisBlogThis!Share to TwitterShare to FacebookShare to Pinterest
Labels: Book Review, Empress DJ, Giveaway, I Give You My Heart, SarahJane Ford